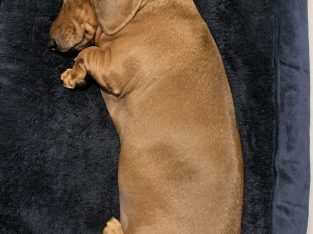 Trying to find a safe and loving home for my 1st born. Unfortunately I am unable to give him the attention he deserves after recently becoming a single mum to a bub and planning to relocate.   His name is Floyd, he was born 26/10/2016. We got him at 8 weeks old from a breeder

Why are you reporting this ad? Trying to find a safe and loving home for my 1st born. Unfortunately I am unable to give him the attention he deserves after recently becoming a single mum to a bub and planning to relocate.

He’s had his vaccinations, just not the boosters.

He’s been a fantastic dog, he hasn’t injured him self ever, he’s got and healthy. The only visit to the vet was in 2018 when he had dry ears. His bloods were tested, and prescribed cream and antibiotics. The vet wasn’t too concerned as his behaviour hasn’t changed. It eventually disappeared and never came back!

He does have small dog syndrome where he likes to bark at bigger dogs.. but if you allow him to sniff the other dog to scope him out then he’s normally pretty good.

Floyd has been around my 18mo since he was born and he has been really gentle and keeps his distance when ordered to. I have no worries having them in the same room together.

Floyd has recently been living with a shapoodle of the same age. They get along like a house on fire.

Floyd in the recent months has a bit of anxiety I guess where he tends to lick the carpet. This saddens me and I wish I had the time to take him for more walks.

He has a slight bend’ in his tale- it has always been like that since he was born. It gives him character! It doesn’t hurt him and he’s never been bothered by it.

Other traits are similar to all dachshunds. So please if you aren’t aware of their personalities then don’t bother msging me. 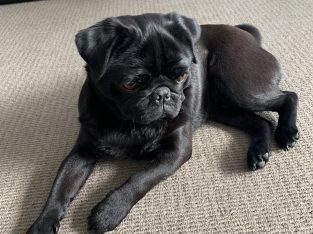